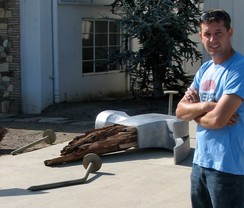 PROFESSIONAL CONTRACT WORK
2012 – 2014
Roger Stoller. As a public artist with a background in design, Roger has completed a number of large-scale public commissions across the nation. Some of the projects I have been involved in include "Vibrant River" a 15' x 40' Stainless Steel wall-mounted Sculpture on the side of the Ford Center in Evansville, Indiana, "Sun Helix," a 12' x 20' stainless steel spiral sculpture at San Angelo University in San Angelo, Texas, and "Monolith," a 12' tall granite fountain to be installed in Palo Alto, California in 2014.  I began working for Roger Stoller in 2012 as the finisher; applying final surface finishes using a variety of tools and techniques. Since then, I have become a lead in the fabrication process of 5 large-scale public works, using both Stainless Steel and Stone.

2003 – 2014
David Middlebrook, internationally known artist specializing in large scale stone, bronze, and aluminum sculpture.  I have been David’s lead fabricator and technician since 2005 working on public and private commissions, gallery shows, and public installations. I have been heavily involved in all aspects of work in the studio including mold-making, all aspects of metal casting, stone shaping and polishing, mechanical attachments and mechanisms, and technical engineering.  Some of the projects include “TIP” a public art project in Milwaukee WI, “Haywire” a two-year installation for the El Paseo Invitational Biennial in Palm Desert, California, and “Basal Instincts” at the Mac Art Group for the Miami Basal in Miami Florida.

2005 - 2014
Harry Powers, internationally know artist specializing in bronze and aluminum sculpture.  I have been Harry’s lead fabricator, mold maker, and technician for numerous projects including the Spirit of Ireland award in San Jose CA, four aluminum and bronze public art installations placed at the Sonoma Community Center in 2007, and “Resurgent Galaxy,” a concrete and aluminum public sculpture in front of the Alma Via assisted living facility in Union City CA.  I have worked closely with Harry Powers on most of the sculptural work he's created the last few years, including several of the pieces shown in his one-man retrospective at the Triton Art Museum in 2012.

2010 – 2012
Robin Lasser, Internationally known artist producing photography, video, site-specific installations, and public art dealing with socially and culturally significant imagery and themes.  As part of a team, I worked with Robin to complete a public art installation “A Floating World,” in San Jose, CA.  For this project, I provided consultation on design, materials, and engineering of 25 miniature tents that cantilevered off the side of a bridge.  I produced a budget for the fabrication of the tent armatures and was able to work within the proposed budget and on schedule to complete and install the project.  I have also worked with Robin to produce budgets, materials and design consultation, and technical advice for other public art proposals.

2007 – 2012
Jerry Smith, a California based artist with collectors nation wide producing mostly figurative bronze sculpture. I have assisted Jerry with the creation of a life-sized replica of Father Bellarmine, which was installed at Bellarmine College Preparatory School in San Jose in May 2010, and a 6' x 4' paneled wall sculpture, which was installed at Santa Clara University School of Law Library in March 2011.  I have also assisted Jerry with a number of smaller sculptures, which have been shown in galleries in both California and Nevada.  In my work for Jerry, I am typically responsible for casting and finishing of small-scale work, as well as technical and fabrication assistance of his larger work.

OTHER PROFESSIONAL EXPERIENCE
2013       Guest Lecturer at San Jose State University. Body Casting Demonstration and Instruction for a class on
Mold Making.
2011       Guest artist at San Jose University. Instructed and demonstrated casting process of a large-scale artwork
to students at the University facility.